Too Much Barking at the Window by their Miniature Poodles

Too Much Barking at the Window by their Miniature Poodles

Jack is on the left, Ozzy on the right

There is only one problem with the two adorable miniature poodles – too much barking.

Jack in particular goes into a barking frenzy when he hears or sees anything outside the house.

Rarely in the course of my job with owners who have problems with their dogs do I visit dogs that are quite so well-trained and good. They are friendly, bright and happy little dogs. They are wonderfully trained with all sorts of tricks and antics, they are super obedient before their food goes down. When asked, they will go to their mat and stay there (see below) and much more.

They walk nicely and they are quite good around other dogs despite over-boisterous bigger dogs having hurt them and dogs having snapped at them a couple of times.

Barking is the problem

On the barking front, the days don’t start well. The dogs come up to the bedroom first thing in the morning and straight away Jack, on the left, is on watch out of the window from the bed, waiting for things to bark at.

Then, when the lady gets up, he is running around downstairs, from window to window, barking at things as she tries to get washed and dressed. Already she is becoming anxious and exasperated.

Then, when Ozzy is let out into the garden he rushes out barking and running the boundary. He just stops barking briefly to do his business.

Naturally the two dogs hate anything coming through the letterbox and will bark madly if there is a ring on the doorbell.

I’m sure this sounds familiar to a lot of dog owners! They believe they have tried everything but nothing works. One common mistake is to ‘try’ things and not carry on for long enough. Another is to deal with the barking as though barking itself is the problem, rather than the symptom of over-excitement, fear, protection duty. Arousal causes the barking.

The humans need to take control of protection duty. This doesn’t mean that the dogs are expected to stop barking altogether. It means that they can alert the humans and then leave th

e worrying up to them.

How people react is the key. Any form of scolding is merely joining in. Any form punishment can only make them more fearful and reactive. The whole family needs to be consistent in reacting in the right way every time the dogs bark – and immediately. The ‘right’ may not be the same in every case, so we work out the best strategy for helping these dogs out.

Not a part-time job

For best success it’s vital to be on the case constantly. We can’t only deal with it just when we have time and inclination and at other times leave them to sort it out themselves. Therefore, when the people are unavailable or tied up doing something else, they should shut the dogs in a ‘bark-free’ environment or a room with no view (in this case in their crates), with something to do.

How can they respond every time their dogs bark when it is so frequent, without going mad? The more the little dogs bark, the better they get at it.

Key to success and sanity is cutting down as much barking opportunity as possible. They can do this by blocking the view out of windows with static plastic window film or moving furniture, drawing curtains and so on. An outside mail box solves the problem of post invading their home through the front door.

Taking Ozzy out into the garden on lead for a few days will break the ritual of rushing out barking.

This the latest feedback: “I am very pleased with the progress Jacks has been making. The mornings are much calmer now but if he gets a bit excited I pop both him and Ozzie in their crates with a treat and their music on. They are both quite happy with this arrangement. When people come to the door Jack knows the routine now and comes happily trotting back to me for a treat when I use the “OK”. I now feel in charge (in a nice way), and that I can bring peace and calm when needed to the home I share with my dogs.

Thank you for your help and advice, we would not have the improvements we have now without it. I am very well aware that the boys need consistent handling and don’t intend to go backwards.”

Easily excited and vocal. He whines and barks.

Some dogs, like some people, are more easily excited and more vocal than others! Genetics is involved and in the case of a dog this includes the breed. Dylan is a Border Collie, not one Read more…

Working Cocker Spaniel Lottie has a rather unusual living situation. It all started very well when she was a puppy, but then things changed. As she became older, she grew more alert. Lottie lives with Read more… 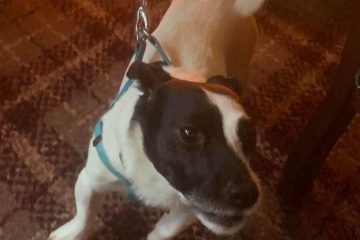 The Fallout from Over Arousal

Jack Russell Bugsy’s online consultation. The young lady lives with her father. They have had Jack Russell Bugsy for two months now. He’s seven years of age. She got in touch because of Bugsy’s constant Read more…