Ellie is a clever, gentle, beautiful, well trained 4-year old Border Collie. She knows a large number of commands and names for various objects. She is also a perfect example of how knowing words and commands can be pretty irrelevant if she feels like ignoring them. It always works best if a dog wants to do something of his or her own free will.

Ellie can be rather aloof, bestowing her attention largely under her own terms. She can be quite demanding whilst not putting herself out in response to their demands. This is most demonstrated by her lack of recall, even indoors or from the garden. She absolutely understands what is required, but sees her owners’ wishes as irrelevant so she simply iognores them. In subtle ways she is used to making them do the running.

Where food is concerned her humans, like so many, feel they are in control (human fashion) with commands to Sit and Wait after the food is down, but because her food is always brought to her Ellie may well see it differently – like she’s being waited on. The little routine she has to go through must make no sense to her. Where is the logic of waiting after the food is down or available? Is there any animal that would do that? Waiting before it goes down is a lot more sensible – as does having to put in a bit of effort to go get it!

In some circumstances Ellie can be quite a nervous dog with some typical Collie traits. She is worried by other dogs they meet when out, and very reactive to passing large or sudden vehicles, trains on the nearby railway line and so on, wanting to lunge and chase them. No amount of traditional training or ‘controlling’ has stopped her doing this beyond preventing her through physical strength. She barks at vehicles, horses and dogs as they pass her garden. It is difficult because these things happen suddenly. Dogs react most to ‘sudden’ (as do we). A steady stream of tracters or trains would soon habituate her.

In their role of parents/leaders, her humans now need to convince her that they are there to protect her and to make the decisions,both at home and when out. Commands, telling her to Be Quiet and ‘training’ just are not doing the job. What is needed is a lot more subtle.

This is a classic example of people who have done all the ‘right’ things to give their dog a happy and fulfilled life – long walks, training, socialising, agility and so on – but where things don’t improve. The only way things will change with Ellie is if her humans change what they themselves do. The whole walking, barking, reactivity thing needs to be dealt with in an entirely different way. Instead of imposing human demands upon her, she needs a chance to work out for herself the appropriate behaviour without the distraction of commands. She needs to feel safe.

Don’t get me wrong, commands like Come, Stop, Stay and Sit all have their place, but we tend to use them willy nilly when they are inappropriate or unimportant so they lose their power when they are vital. A calm state of mind isn’t well served by commands. Silence is Golden (I think that was The Tremeloes!).  A loose lead, a calm owner who takes appropriate action rather than using commands, who acts logically as a leader or parent would – and that is not to force her to Sit and Wait, trapped like a sitting duck as ‘danger’ approaches (or to march directly onwards commanding ‘Leave It’ as most traditional dog training will dictate) – will result in a more confident and trusting dog. And this brings us back to the beginning. In order to trust them with her safety, she also needs to see them as the decision-makers and protectors at home too.

There is a lot to think about to start with, but gradually if people work at it and are consistent, if they look at things from the dog’s perspective, a new way of living with a dog becomes a way of life and the dog learns self control. 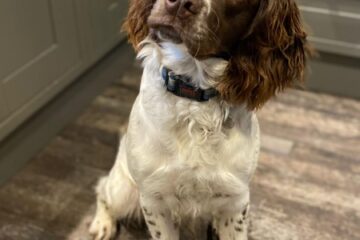 When stirred up, Bertie humps relentlessly.

The poor lady has bruises all up her legs.   Once Bertie latches onto her she can’t get him off. He occasionally humps one of their young daughters but never the man. He only has Read more… 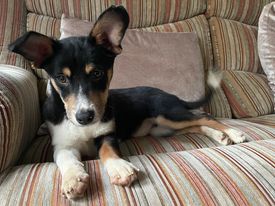 From Romanian streets to a new life as a pet in a home.

From the street in Romania, to a rescue compound, Billy has now lived in a house for just one week. A new life It’s sounds wonderful, but it isn’t yet all wonderful to Billy who Read more…

Staffie sibling brothers perfect at home. One reactive to dogs, the other pulls.

Atlas and Apollo are sibling brothers, two years of age. The family very wisely did most things with them individually for the first few months of their lives, which has paid off. The two well-trained Read more…