They have had 9-month-old German Shepherd mix Sasha for four months now, during which time they sent him away on a board and train programme.

Firstly, it takes a rescue dog a good three months to settle in and this has been interrupted.

Secondly, my belief is that teaching ‘commands’ to try to calm and over-excited dog is doomed to failure. It’s the excitement that requires addressing and the dog’s real needs addressed.

Unsurprisingly, he came home worse than when he left.

Sasha’s over-excited. He then nips and bites

When does this happen? Mostly during play. He will fly at them and bite. If they turn around he will bite their bum. They will say No and Get Down.

When the lady tried to pull the over-excited dog off a hole he was digging in the garden, he turned on her.

But WHY does he ‘attack’ them like this? It’s not vicious.

He simply can’t help himself. He is fired up and he has to drain his over-excited arousal somehow. Jumping on them and biting helps fulfil this need as does digging. (The lady had already done as I would have suggested – provided him to an acceptable digging place).

Like many people, they feel the more they play with him and the more they tire him out through exercise., the calmer he will become.

It’s usually the opposite.

Repetitive ball play or hand games, particularly when accompanied by commands, stoke up the fire. More pressure makes him more over-excited and frustrated. Then he redirects with his teeth.

Already they are finding calming ways of feeding him to diffuse his main explosion time of day, 9pm, when everything has built up to crisis point resulting in rough zoomies.

Now they will control how they let him out into the fox-populated garden which gets him over-excited every time. Telling him to sit at the door when he is champing at the bit will only increase his frustration. They will use the long line and scatter feeding to get him out of this particular habit.

They will, I hope, cease all hand games. Sasha will leap on them at any time and mouth, something they inadvertently encourage by cuddling him immediately afterwards.

I suggest cutting right down on anything repetitive like ball play. Walks aren’t about covering distance but about mooching, sniffing and doing ‘dog things’.

A question I often ask of people with an over-excited dog is, what do you think your would your dog be doing if left to his own devices, with no humans in control?

They worry because their five-month-old Show Cocker Oscar’s barking is getting too much now. Some dogs are simply more vocal than others The main problem is two dogs next door that run up and down Read more… 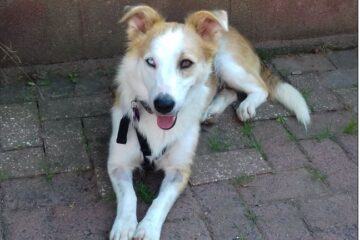 Fearful reactivity starts at home. From the window, she chases away people, dogs and traffic.

Romanian rescue Violet has been with them since August. Her fearful reactivity to anything or anybody outside the house is increasing.   She was found with nine puppies. No doubt she believed that their survival Read more…

When stirred up, Bertie humps relentlessly.

The poor lady has bruises all up her legs.   Once Bertie latches onto her she can’t get him off. He occasionally humps one of their young daughters but never the man. He only has Read more…