Missing out. Barking for company

Poppy barks when she is left.

It distresses the young couple because she may not be happy.

She barks mostly when she is left alone and feels she’s missing out. From the kitchen she can hear the young couple working in the house, but she can’t get to them.

It’s just possible that something they unwittingly did started this off. To begin with she was fine.

To start with she had run of the entire large kitchen area. However she was underfoot when the young lady was cooking and too much space wasn’t helpful for toilet training.

So they put up a barrier to contain her in a smaller area – where she could be with them in the kitchen without getting to them. She could see them coming and going but was no longer able to follow them.

They believe this has triggered her frantic barking and fear of missing out.

They have removed the barrier which has helped, but they still have to shut the kitchen door on her when they go to work in the living room and upstairs.

Having a puppy with them while they work could be hard because the important calls they are on could be interrupted!

Poppy can’t settle or relax when they leave the room and walk out on her – unless she is nearly asleep. She just constantly barks and tries to escape after them.

Had I done a puppy parenting session at the very beginning, I would have advised something like a puppy pen from the very start so she never got the taste for following them about. All good things would have been happening in there.

What kind of separation problem is it?

They do leave her alone daily deliberately, going out of the house for an hour or two to get her used to being alone. Until they get a camera we can’t tell whether she settles or not when she knows they are not about and she’s not missing out on anything.

She’s okay downstairs alone in her crate for most of the night, though again, if she wakes and they come down to let her out, she now needs (and gets) their company.

With any issues to do with separation, we need to find out just what kind of separation problem it is.

This probably isn’t ‘separation anxiety’ as such. Only the camera will tell. They leave her sleepy and she seems quiet when they return.

Poppy’s separation problems could possibly involve some ‘isolation distress’ where the company of any animal or person could help. (I have suggested they try a Little Buddy teddy – a heartbeat comforter. It may help and can do no harm).

Fear of missing out

Whether or not isolation distress is involved, it’s definitely and mainly fear of missing out.

Poppy is shut away from action and company that she would like to part of. She has been banished, so she barks.

It will have begun about five weeks ago as ‘barrier frustration’. They were in the same room but she couldn’t get to them anymore.

We discussed various strategies so she feels she’s not missing out when one or both of them walk out on her. It could be a slow process.

Don’t wait for Poppy to bark

They will now associate all departures, even the briefest, with something good – food in a Kong or scattered kibble.

Another strategy is to come in to her first before she barks – they could even wake her up if she’s been asleep for a while. She will feel she is missing out on things less if they sometimes bring the action to her, out of the blue if you like.

They can sometimes seek her out first.

One week later: Things are definitely improving with your suggestions, Poppy is much calmer inside the house now and we’ve actually let her have the run of downstairs too which I think has also helped.

Three weeks after our online session: Poppy is great, very settled now and she even put herself to sleep yesterday when we both left the house for an hour! She is doing a lot better around people on her walks and not barking. We introduced her to a friends dog again in the garden and she initially barking but then settled down and relaxed. Slowly we are getting there! Thank you so much for your help, she is a different dog. 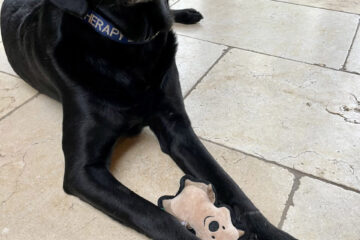 Without human company she barks constantly. The three other dogs are no comfort.

Four the past four weeks, 6-year-old Black Labrador Jemima has lived in her new home. She lives with three other rehomed Labradors. All four are female and they all get on famously. An elderly lady Read more… 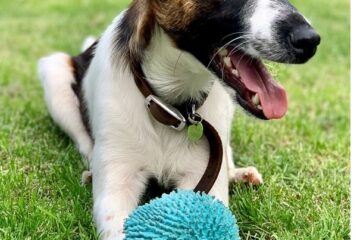 Left alone all by himself he panics, but any company will do – human or dog.

This is quite a straightforward separation case. Two-year-old Fox Terrier Rufus panics when he’s left all by himself. He came from the breeder to live with the young lady at about eight months of age. Read more…