Jumpy, nervous and on edge. I would guess this is in this little Havenese’s genes, though not a general breed trait. It’s certainly not the fault of the family, a couple and their daughter aged ten.

He had two unfortunate early incidents that he’s not bounced back from. He was terrified at an early vet visit. Then large dog chased him, leaving him traumatised.

Some of the time I was there Bouncer appeared restful. A dog may look asleep but it can belie what’s going on inside him. Bouncer regularly startled and jumped up or lifted his head and grumbled. Much of the time we couldn’t hear anything ourselves.

When he suddenly grumbles or barks, it’s helpful to imagine what Bouncer would be saying if he were a child. It could be ‘Help, what was that, I don’t feel safe’. This is useful when working out the best course of action.

This isn’t about dealing with the growl or bark itself, but with the emotion inside him that causes it. If a child is crying ‘I’m scared’ you wouldn’t tell her to be quiet. If she looked alarmed, you wouldn’t ignore it. You would do everything you could to stop her feeling scared.

Helping him to feel safe

They will help him to feel safe around the things that challenge him. This could be someone at the door, a car door slamming outside, big traffic or an off-lead dog running up.

If picking him up helps him, then that’s fine. Here is a nice little video of how to teach your small dog to ask to be picked up.

To help make Bouncer less jumpy, they will cut down on exciting stimulation. It sounds boring but is a necessary sacrifice. They will give him more brain-work, sniffing, hunting etc. instead.

I found him to be a friendly little dog. It was his own choice to come to me or not. He is wary of people advancing directly towards him, particularly at the front door. He doesn’t like big hands coming out over him. Bouncer feels threatened by a child’s face in his own.

He regularly, in dog language with a grumble, asks the daughter’s friends to back off. Sometimes they even try to get into his bed with him.

They will now teach them not to invade the little dog’s space. When kids run about it stresses him, so they will be aware of that.

To counter-condition (gradually help him to accept and be easy with the scary things) they will need food. The gentleman may feed him treats for no better reason than that he loves him. Now he will save the treats – tiny tasty titbits – for any time the little dog is jumpy. A quick, immediate ‘Okay’ whilst dropping the food will deal with the underlying emotion – Bouncer feeling unsafe.

In this way he will show the little dog that he’s protecting him and everything is alright.

In his nervous, jumpy state the smallest of things alerts Bouncer. Consequently, he’s very likely to be sleep-deprived which can only add to his mental state.

They will help him to feel less nervy by keeping him as calm as possible.

The lady gives him lovely walks which provide him with the perfect kind of stimulation. He does a lot of sniffing and marking and he rolls in the grass. It’s like he shaking off all the stress and worry.

All the time they worry about further encounters with off-lead dogs that rush up and overpower Bouncer. Unfortunately, life happens. Unintentionally ignorant dog owners don’t control their dogs. ‘My dog’s friendly’ just doesn’t cut it.

The lady in particular will help Bouncer to bounce back by herself acting calm and confident. Not always easy. 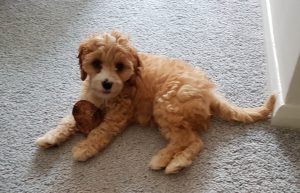 All alone. Many puppies and dogs can’t cope. Separation anxiety

Poor Dexter seems depressed. He lacks confidence and is scared of many things. They told me he had Cocker Spaniel and Sharpei in him but I would guess Staffie and Labrador. He has some characteristics Read more…

I believe that Rosie is genetically a timid dog. She previously lived with quite a lot of dogs and they bullied her. She is very scared of dogs. Timid Rosie hid As I entered the Read more…