He greeted me outside the house, pulling hard to get to me. Most of the time I was with them he was flying all over the place or barking at the young man in particular. He barked for him to throw a toy.

The man always complies because the barking goes right through his head.

He barked at me too but not so much. I ignored it. After a couple of hours of ignoring the barking and giving Sabre things to do, I introduced Click for Calm.

At last Sabre understood what we wanted of him.

The wrong kind of stimulation

They have a very clever puppy that needs a lot of mental stimulation. Too much stimulation of the wrong kind can cause problems.

They are pumping him up too much, the young man in particular. The fallout comes in the form of over-excitement.

He barks and obsesses with people throwing things for him.

There are issues that need addressing. These are chasing their two cats, chasing cars, jumping all over everyone and barking. This is relentless and constant barking.

Like many Border Collies in particular, Sabre repeatedly drops a toy onto a lap. Then he barks. And he barks – until someone gives in

Mealtimes are impossible. To stop Sabre barking, the young man plays while he’s trying to eat.

With all the throwing they are practising and honing Sabre’s chasing skills. Then don’t want him chasing the cats or traffic.

They are making super-skilful his already predatory instincts. All the throwing fires him up to the point of obsession.  He would go on until he dropped. His brain gets a buzz of dopamine every time he chases. To the brain, like cocaine, it’s addictive.

Cut right down on throwing and never when he’s asking. They don’t need a thrower on a walk (see ‘I Hid the Ball Thrower‘).

While he’s chasing his obsession he is missing out on the enrichment of the environment. This is where all the sights and smells are.

Unwittingly taught him to bark

By always giving in they are reinforcing the behaviour they don’t want. Because barking drives them mad, they give in! They can see that they have actually taught him to bark.

Now they will show him that the barking and flying all over them doesn’t get the attention he wants. They will do this by looking away, ignoring it and even walking out.

This is not enough. Equally important is to show him what he can do instead and to fill his life with more suitable stimulation. We started Click for Calm and that’s the way to go with Sabre. If they have no clicker on them, ‘Yes’ will do, followed by food (but no chat as chat would simply pump him again).

He caught on super-fast and was soon experimenting to find what would earn him clicks!

With Click for Calm they will make not barking rewarding.

Yes, he can have a ball, but only for ‘changing the target’ work and nothing else. They can throw other toys, but only a few repetitions and never when he’s asking for it. After three or so throws, they should remove the object.

They will provide alternative behaviours to the things they don’t want. They will find alternatives that are incompatible with cat-chasing for instance. When he’s eyeing up a cat, on a cue word he can chase a ball in the other direction instead. Change the target.

With Sabre on lead and in a room with the cats, they will use Click for Calm. Each time he relaxes, looks away or settles he will earn a click.

As an antidote to arousal, hey will provide as many ‘calming’, brain and chewing activities as they can. Already they feed him in various imaginary ways and teach him training tricks. They will add ways of allowing him to let off steam like a rummage box or snuffle pool.

Now they will instigate plenty of play and training sessions, but only when Sabre is quiet.

He will learn to keep away from them when they are eating. They can give him something to do that is incompatible with barking at them while they eat. For now they will throw a handful of kibble all over the grass and shut him outside.

He must never again think that barking at them while they are eating will get him back in. They will need to hold their nerve. – let him in once and will never stop.

They live in a friendly environment with people calling. They will need to pass the word around. The will ask other people to give Sabre a chance to calm down before they say hello to him – a notice on the gate too.

As the barking affects the young man the most. I gave him my clicker. With this small object and a supply of tiny bits of food in his pocket, he has the power to stop the demanding barking.

Another Cocker Spaniel that will Guard Resources and Growl 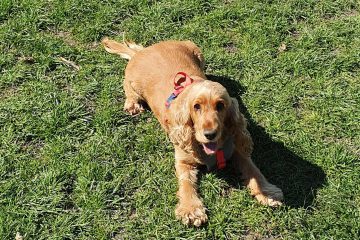 Bella is defensive and touchy. She just wants to be left in peace.

Bella has always been a bit defensive when approached by other dogs. She just wants to be left in peace. The four-year-old Cocker Spaniel lived in harmony with older Cocker Mikey. Then the family added Read more… 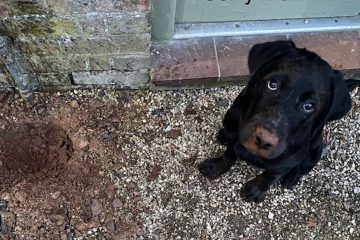 Play Fighting Between Puppy and Older Dog Gets Out of Hand