Charges at the kids when they move. Barks and scares them.

Rango lies where he can watch the doorway. When the children enter the room, he springs to his feet and charges at them, barking. He then uses his mouth with multiple ‘nibbles’. Fortunately no teeth (yet).

It is the same when a child gets up from the sofa. Rango immediately charges. He may also vocally object when a child suddenly says something.

He is a big dog, a Lurcher, twenty-one months of age and they have had him since he was a puppy. They have had him DNA tested and he is mainly a mix of Greyhound and Border Collie.

The family has worked so hard with the gorgeous boy, doing all the right things from the start. They socialised him conscientiously and took him to training classes until he was about ten months old. 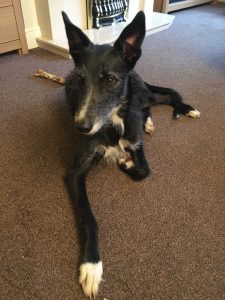 This is when another of Rango’s problems began to surface, that of guarding his personal area from other dogs in the hall. He is fine when on the move, but when stationary he becomes territorial of the space around him and it’s the same on walks.

If he’s sleeping the other side of the lounge and someone stands up, he charges at them. This is his automatic response when suddenly awakened. Jango startles easily .

I am sure his problems with people moving are mainly genetic. Recently they found that his mother displayed some of the same behaviours.

The guarding of his personal space began to surface when he reached maturity. The herding and chasing behaviours are most certainly hereditary. He targets the children because their movements will have been less predictable, faster and more sudden. When he was a puppy, sleeping, sometimes they landed on him when sliding off the sofa.

The first is to prevent further rehearsal.

While I was there the children rehearsed entering the room, at the same time saying “Jango” and rolling him a bit of food. They rolled the food off at a tangent. This way some of Jango’s instinct where he charges and chases can be deflected away.

After a week or so the food will be enough and they need no longer call him. I suspect by then he will have associated the kids’ entrance with food and be anticipating it.

I suggest they give each child a treat bag to wear around the waist for now.

When Jango was asleep, the man rehearsed saying his name at the same time as standing up and chucking him a bit of food. Normally this would guarantee an aggressive reaction. Doing it this way reduces the startle reaction whilst teaching the dog that, though a surprise, it’s a good surprise.

Thirdly and most importantly, they should reduce his stress/arousal levels in every way possible. It’s significant that after a calm night he never charges at the children in the morning and it builds up during the day.

The calmer he is, the less easily startled he should be.

Unwinding after a walk

Walks themselves may tip over into over-arousing him. It’s after his first walk that he’s noticeably more reactive to being startled. He is more stirred up at the end of the walk than at the start, despite having a long run off lead. Too long, perhaps?

They will now try an ‘unwind’ at the end, letting Rango stand around sniffing for five minutes before getting into the car. Sniffing at the end of the walk is something they usually discourage. This must be frustrating to a dog as he gains most of his information via his nose.

NB. The precise protocols to best use for your own dog may be different to the approach I have worked out here. Finding instructions on the internet or TV can do more harm than good sometimes. Every dog is different and every situation is different. If you live in my own area I would be very pleased to help with strategies specific to your own dog (see my Behaviour and Support page)

Due to Corona virus, no more home visits for now. Why not take advantage of restricted movement and extra time by helping your dog? Take a look at my Zoom Distance Behaviour Help, available anywhere Read more…

Adolescent German Shepherd Knight is a challenge. He is now nearly nine months old, wilful and strong. His owners do all they know to give him a good life – they walk him, feed him Read more…

Ollie, approached a bit differently, will learn self-control. The a four-month-old Border Collie lives with a lovely, gentle young lady and her two children. He is a gorgeous puppy and she is working very hard Read more…