Border Collie nips legs of people walking in the gate

Border Collie nips legs of people walking in the gate

I was a little wary when I arrived because I knew that sometimes Border Collie Patch nips people he doesn’t know.

When they walk in the gate he barks loudly. When that doesn’t work, he goes round behind them and nips their legs.

As I usually do, I had asked the young lady to put him away somewhere until I was settled and sitting. She then brought him into the room on lead.

As it happened, this wasn’t necessary. The lovely dog settled straight away. It seems he never nips if the person is already in when he meets them.

They live in a big house with a large garden. It’s surrounded by a high fence with a gate.

Patch has free run of the garden most of the time.

Many dogs, given free run of a large area – house and garden –  with gates that people can walk through at any time, would become territorial. Patch is being given too much responsibility.

This is compounded by their shutting him in a shed at night and when they go out and leave him. He will hear anyone approaching along with night animals. All he can do is bark with nobody to help him out.

When Patch is ‘on duty’, if he’s sufficiently aroused, scared or worried, the natural escalation from barking is to nip. The barking says Go Away. They don’t go, so he nips them. That does the trick. Now they back off.

There are two main things they need to do in order to change this.

One is to put management in place to prevent Patch from ever being put in the situation again where he nips.

The other is to take on the role of guard duty themselves, his humans being responsible for all comings and goings.

At the same time they will encourage him to associate someone coming into their property with something good. Petting isn’t good enough. He gets plenty of that anyway whenever he wants it.

With management, no more nips

So, I suggest he has a bed in the kitchen instead. If he does bark at night, now unlikely, they are on hand to take responsibility.

They will put a lock on the gate so that nobody can simply walk in anymore. A bell or intercom by the gate will do the trick. Because he nips, Patch can then first be put somewhere ‘safe’, the kitchen perhaps, before they let the person in.

If someone is staying and not just delivering something, he can join them once they are settled like he did with myself. This way his humans will have taken on the responsibility for ‘intruders’ themselves.

I feel that as a clever Border Collie, Patch needs more to occupy his mind in terms of mental fulfilment. This should increase his confidence. The calmer and more confident he is, the more resilient he will be and the less likely he is to react badly should their precautions be accidentally breached.

If he had more ‘work’ to do, it’s likely Patch won’t need to take his self-appointed job of protecting the property and his humans quite so seriously.  I have suggested scent work or perhaps agility.

Patch is great with other dogs – and with people so long as they don’t enter the property. Its only then that he nips. He’s absolutely fine meeting people when out and a joy to take to the pub with them.

Changes to the Dangerous Dogs Act 2014

The revised dog law, changes to the Dangerous Dogs Act in 2014, says that someone only has to feel threatened for the owner to be prosecuted. See here. This can be on their own property.

She goes for feet. Teaching puppy what they DO want positively

There is only one thing not to love about adorable Bichon Frise Puppy Mabel. She goes for feet.  It’s like as soon as she sees anybody walking about, she is straight for their feet. Any Read more… 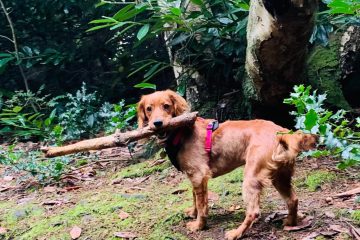 (Online consultation) Pippa is a beautiful year-old Working Cocker Spaniel. She is affectionate and clever. The teenage daughter adores her – and I’m sure the feeling is mutual. However, a human’s way of showing affection Read more…

They’ve not had a puppy for over thirty years and their aim is to be the best dog parents possible. They chose 10-week-old Cockerpoo Hugo very carefully and did all the right things. The lady Read more…