Being King Isn’t All it’s Cracked Up to Be

Being King Isn’t All it’s Cracked Up to Be

Yesterday it was a Miniature Schnauzer and today a Giant Schnauzer!

Benson is very Big and very regal. He is magnificent – a really lovely boy, and a teenager! He runs the show. After being let outside in the morning he runs upstairs and leaps all over people in bed, may even hump them and may growl if removed. He jumps up and barks while his meals are being prepared (ignoring repeated commands to sit and wait). He jumps up and barks while they try to put his lead on to go out and then pulls like a train down the road until he reaches the park. When let off lead, he may jump up and grab his owners. There is nowhere indoors he is not allowed to go. Benson and the other dog can’t have toys or chews because Benson commandeers them and becomes possessive. He is becoming increasingly protective and wary both when meeting people outside and at home. His owners are getting worried because signs of aggression are increasing.

He has some major plus points. He is aloof and ignores other dogs, so no trouble there.  He can be very affectionate. He likes to keep an eye on his human family, so apart from one time when he was spooked by a bicycle and took it upon himself to run home, he stays near them when out. When called, he comes – but only to within a few feet. Then they have to go over to him! He is still an adolescent and is pushing his luck. The power takeover can creep up on people as they give way bit by bit until they suddenly realise they are being controlled by their dog!

For Benson there is a downside to being King in that without leadership he feels exposed and unprotected so easily scared of things like bikes, pushchairs, umbrellas and so on.  He also is scared when certain people, men mainly, look at him or lean over, approach directly or enter his personal space. A dog with convincing human leadership is much more relaxed and less touchy about his own personal space, less likely to worry about collecting and possessing trophies, jumping up, humping and dominating.

I read somewhere that a leader has a much greater need to lead than a follower has to follow. It can be a long job gently and fairly convincing a dog like this relinquish his responsibilites – to be more relaxed. Trying to do it through domination and force would make things a hundred times worse.

Twelve-year-old Cockerpoo Charlie has become increasingly agitated around the puppy as each day goes by. Fortunately the 11-week old puppy is resilient. He’s a Cavapoochon. They have chosen to get a puppy at this time Read more… 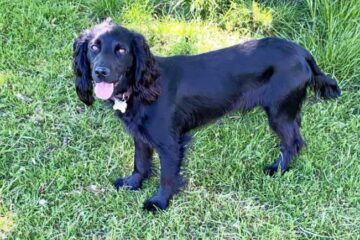 To welcome people without exploding into barking

A dog that doesn’t welcome people into his home is a problem made much more common by lockdown. Vinnie’s owners refer to his behaviour as ‘aggressive’ but that is only because they can’t find another, better Read more…

When hyped up and wild, Nellie needs help. She has a need. Putting a lid on it merely makes it erupt somewhere else. They want something acceptable for her to vent her wildness.